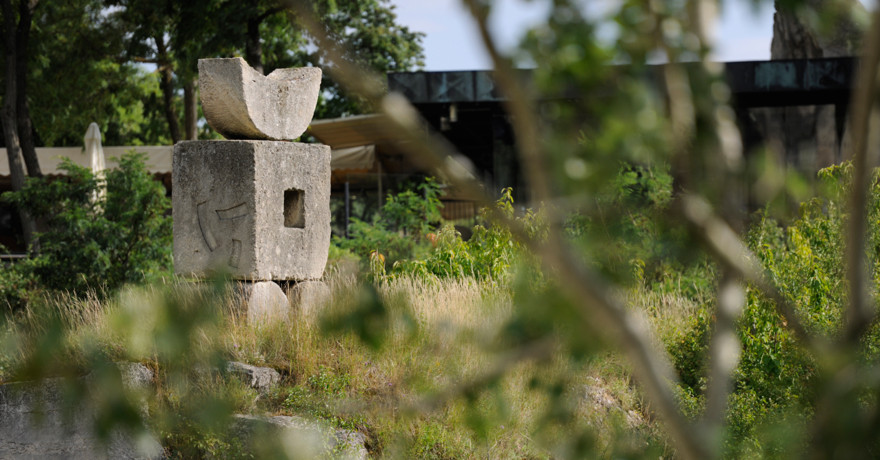 St. Margarethen’s Kogelberg hill is a local secret, one of the most impressive places in eastern Austria. Created millions of years ago from the sand and limestone of the Pannonian Sea, it is located on the threshold between east and west, both dividing and connecting the Pannonian-Hungarian plain and the foothills of the Alps.

Here you can experience a wide variety of pristine nature as well as manmade spaces and cultural sites, testifying to the interest this location has attracted, especially in the twentieth century.

PIEDRA stands for “stone”, to be precise for sandy limestone, and “stone” is the visitor’s overwhelming impression when descending into the quarry. The Piedra logo is a stylized sculpture by Pierre Székely from 1962 called “Joie” (joy). It is positioned above the smaller Ruffini stage. The Hungarian-French sculptor Székely also sees “Joie” as a joyful, celestial chariot.

In Burgenland’s most traditional wine region, set in the open landscape between the Leithagebirge hills and Lake Neusiedl, the visitor will be enchanted by the natural beauties of the Rust Hills. It is easy to appreciate why the region Fertő–Neusiedler See is a UNESCO World Heritage Site.

The quarry in a conservation area

The Ruster Hügelland, or Rust Hills, is a chain of low hills stretching from Hungary to slightly north of Oggau. Fourteen million years ago, this range of hills formed a sea bed, its coast extending to the Vienna Basin. As a result, the sandy limestone at St. Margarethen is characterized by lagoon deposits such as shells and coral. The Romans were already aware of the outstanding qualities of this construction material and used it two thousand years ago to build the key border city of Carnuntum, where Marcus Aurelius, the last great Roman emperor, wrote his philosophical “Meditations”.

The quarry has been valued through the ages. Medieval stonemasons built Vienna’s St. Stephen’s Cathedral from its sandy limestone and a section, known as “Stephen’s wall”, still provides the stone for its restoration today. Many of Vienna’s architectural gems were built from the quarry’s stone, including the Gothic Church Maria am Gestade, the Baroque St. Charles’ Church, and some of the magnificent buildings on the Ringstrasse.

Walks in the area, with its ancient vineyards and pastures, can reveal a wide array of unique plants and animals to the visitor. Here you can find ground squirrels, eagle owls, and praying mantis, spring adonis and pygmy iris. It is well worth hiking up the hill for the views – as far as the Schneeberg mountain and across the vast Lake Neusiedl to Hungary. The Kogelberg’s unique landscape is not its only distinction, however, as here you can also encounter some fascinating art and culture.

One of the greatest visionaries behind PIEDRA was the sculptor Karl Prantl. This Burgenland-born artist studied painting in Vienna and turned to sculpture later on, which then became his life’s passion.

His first studio was at the orangery in Esterházy Palace Park, Eisenstadt. From 1958, he worked at St. Margarethen Quarry, where he discovered that working outdoors had an entirely different set of rules from the studio. This art, and the hard workmanship it required, was of vital importance to his future work; here the form and expression of his entire oeuvre took shape. This new experience gave him the idea of sharing this way of working with his colleagues.

In 1959, together with Friedrich Czagan and Heinrich Deutsch, he launched the first “Symposium of European Sculptors”, which involved living and working together at the quarry for three months every year. Between 1959 and 1977, 110 international artists left a lasting testimony to their work at St. Margarethen Quarry comprising over 159 sandstone sculptures, predominantly on a monumental scale. Many were later transferred to the Kogelberg, where they can still be viewed today. Around sixty works are still to be found where they were created. Several of them are today icons of Land art.

Gustav Hummel, who was running a quarrying company when the symposium was founded, supported it with material, transport, and the assistance of his stonemasons. From 1962 to 1967, the ruin of an old canteen was remodelled into spartan accommodation for the sculptors based on plans by Johann Georg Gsteu. As remarkable pavilions by the architects Roland Rainer and Karl Schwanzer are located within eyeshot, this ensemble has now become a “place of pilgrimage” for architecture, art, and nature lovers.

In combination with the breathtaking panorama, which stretches from Eisenstadt over the Leithagebirge hills and Lake Neusiedl to Rust and further to the Pannonian plain in Hungary, this has become a truly magical cultural site.

PIEDRA – Opera in the quarry

Eisenstadt, and with it St. Margarethen Quarry, became the property of the Esterházy family in the seventeenth century. After two world wars and the Russian occupation, the family is again responsible for managing and preserving this cultural heritage. This magnificent open-air stage PIEDRA is a particular challenge in every respect.

One of Europe’s most beautiful and impressive open-air arenas, operas have been performed at St. Margarethen Quarry since 1996. With the Esterházy Foundation as its owner, this location was redeveloped in 2006. AWG, a young, international architects group from Vienna, designed exciting architecture that was also sensitively attuned to the setting, a space that had actually been an industrial site for many centuries. The architects used corten steel for this reason, referencing the quarry’s long industrial history.

St. Margarethen Quarry boasts one of Europe’s largest and most impressive open-air stages. In fact, there are two arenas hewn from the stone: the main stage that is 7,000 square metres – a vast “opera house” under the stars with almost 5,000 seats – and the Ruffini stage with a maximum of 2,300 seats. Opera has been staged here every summer for almost twenty years. Opera in the Quarry is pure opera, compelling and impressive, exactly as the great composers and opera librettists envisaged in the nineteenth century. At that time, opera represented much the same as Hollywood does today: maximum impact and powerful emotions.